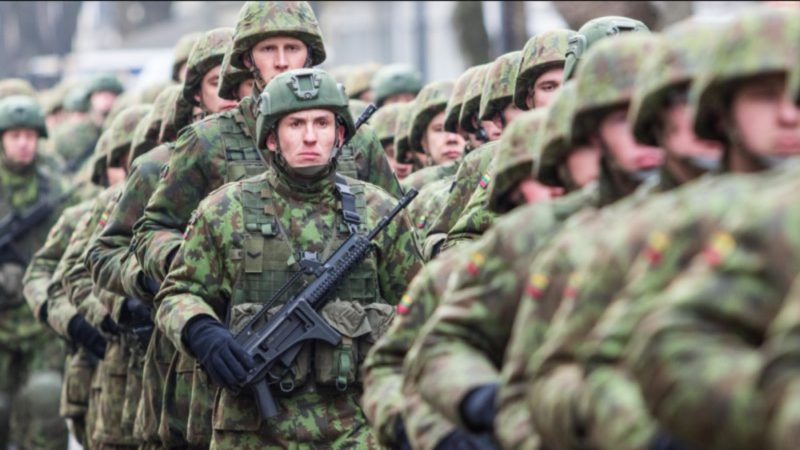 When NATO’s Centre for Strategic Communication in Riga discovered how easy it was to dupe its soldiers online, it has started looking for ways of countering false information, which comes, in large part, from Russia. EURACTIV’s media partner der Tagesspiegel reports.

The Latvian forest, not far from the Russian border. Thousands of soldiers from different NATO member states are training there to ensure continued military presence in Eastern Europe.

But during manoeuvres that spanned several days, some soldiers who were winding down with their mobile phones stumbled across a well-done website claiming to be designed by and for soldiers. On there, the men chatted about the army, the weather and life in general. A few of them also ordered T-shirts on the site, for which they agreed to give their home address for delivery.

On Tinder, a popular dating app, some even communicated with a woman, sending pictures of themselves in uniform. One evening, two soldiers even arranged to meet the virtual woman. They both left their post for her, a move which proved to be a mistake.

The website and the Tinder profile turned out to be a trap – a test carried out by a team of NATO experts on behalf of the Latvian army in the summer of 2018 to identify weaknesses in its own ranks. Soldiers were prompted to send their addresses, spread photos of a manoeuvre and even leave their posts, all with little effort.

For NATO cyber experts, the experiment meant the same could happen anywhere. Who could rule out the possibility that soldiers might not even betray their positions or be blackmailed because of the information they spread online?

The website for soldiers and the Tinder profile was tested by a group of men and women in a low-rise building in Riga, in NATO’s Centre for Strategic Communication, which is supported by Germany.

Janis Sarts, who previously worked for the Latvian defence ministry, is now leading a group of 50 people in the NATO centre, which analyses disinformation campaigns, also called ‘Fake News’.

According to Sarts, it is essential to develop strategies to win virtual battles that are often not recognised. With the test, the NATO cyber experts wanted to show what is possible with smartphones alone: “We want to shake things up,” he said.

Virtual battle for ‘sovereignty of interpretation’

In years gone by, anyone who wanted to use propaganda and ‘muddy the waters’ within the enemy’s ranks had to print flyers, deceive journalists, or send their agents.

Today, it only takes a few minutes to create a target group-specific profile in a popular online forum. People can frequently be misled online, usually for monetary reasons such as credit card fraud.

Those days, what appears increasingly significant, however, is the virtual struggle for so-called ‘sovereignty of interpretation’, a notion which can be boiled down to one question: Whose narrative is true?

In Latvia’s neighbouring country Lithuania, a rumour started spreading in 2017 via social media and chain e-mails that German soldiers who were part of NATO had raped a 17-year-old girl. Many suspect Russian sources were behind the rumour.

Although Lithuania’s government made it clear that there was no such incident, the rumour persisted.

“Deception and lies are spreading faster than ever before,” Sarts warned. According to him, “it’s about sensitising the population and governments to take a closer look”.

German Chancellor Angela Merkel is aware of the risks. The German military needs to learn “how to deal with so-called ‘fake news’ as part of hybrid warfare,” she said at the opening of the headquarters of the Federal Intelligence Service in Berlin last February. According to Merkel, this will be essential for “Germany’s security and social cohesion in the future”.

The notion of ‘hybrid warfare’ is broad. It describes all forms of open and covert, regular and irregular, military and non-military fighting. In modern conflicts, it is sometimes even difficult to make a clear distinction between “war” and “peace”.

According to Merkel, most false reporting was often state propaganda. For Janis Sarts, Russia is the most active when it comes to this.

However, experts in Brussels and Helsinki also stressed that many states, movements and criminal cartels are willing and capable of disinformation campaigns. For instance, Islamist groups are said to be systematically spreading ‘fake news’ to serve their interests.

This is why NATO experts in Riga are paying close attention to online forums and debates.

If a multitude of comments and links are being posted at the same time, this could mean a bot is being used. If commentators systematically comment on very different topics such as elections in Brazil and Latvia’s football league, this could also mean that posting these comments did not require just one person.

And what about pictures? Do the photos even correspond to the profile? For instance, the profile of an alleged Russian citizen, who comments massively online, turned out to have a profile picture of Canadian actress Nina Dobrev.

However, dubious online actors do not always act in the interests of states. In Russia alone, according to one estimate, 300 companies are supposed to sell “likes” and “followers” on social media, but mostly for “commercial manipulation”, according to the NATO experts. For example, these are used to draw attention to certain restaurants, traders and even doctors’ practices.

However, the NATO centre in Riga is becoming larger, and talks with other countries are currently underway. Already today, the centre also welcomes non-NATO members, including Sweden and Finland.

In Riga, however, the information war is only being researched and documented – it is not necessarily being fought against.

But when hostile actors deliberately spread unrest online, they may provoke manoeuvering mistakes, accidents and even riots, meaning affected states would then have to react.

For example, Latvia, as a NATO member state, could rely on Article 5 of the NATO Treaty in case of a virtual attack, meaning other NATO members would have to provide assistance.

However, even hardliners in Brussels and Washington would not want to risk military strikes based on ‘fake news’ allegations, even if they are well documented. In any case, no common approach on the issue is currently in sight, both between the 29 NATO members and the 28 EU member states.

Governments themselves are in the sole position of changing this. That is why they have set up the European Centre of Excellence for Countering Hybrid Threats in Helsinki. Twenty-six states, including formally neutral ones, take part in the think tank’s activities. This centre is also growing, and Portugal plans to join soon.

In Helsinki, the young Lithuanian Vytautas Kersanskas is currently examining what measures should be taken in case of propaganda attacks. Could this involve the setting up of one’s campaigns, the imposition of sanctions or the secret service?

“We want to develop a catalogue of measures in the coming months to see how to respond appropriately based on the type of attack,” Kersanskas said.

Now it is no coincidence that Latvians and Lithuanians of all people are disturbed by Russia’s policies.

Until 1991, the Baltic states, Latvia and Lithuania as well as Estonia, belonged to the Soviet Union as three republics, which have been considered as Russian-dominated by many. This is not only because Moscow was the Soviet capital, but also because after 1945, many workers and families of officials moved from Russia to the Baltic states.

The Baltic states joined NATO in 2004 and Moscow has felt provoked ever since.

In Riga, people have been worried about a Russian invasion, similar to what Moscow did in Ukraine. There, 25% to 30% of the inhabitants are of Russian origin.

And Latvia’s governments don’t make it easy for them. Around 200,000 Russians living in the country do not have Latvian citizenship to date. Moreover, 1,000 Latvians marched across Riga to commemorate Latvian veterans who fought alongside the Waffen-SS,  making it easier for Moscow to speak of anti-Russian discrimination.

Viktors Makarovs is a security advisor to the Latvian government – and a Russian. As the son of Russian-speaking Soviet citizens, Makarovs also had no Latvian citizenship after the fall of communism.

“But the procedure for obtaining citizenship is simple,” Makarovs said, adding that “not everything the Russian media spreads about Latvia is wrong”. According to Makarovs, Russian propaganda ties in with real problems such as Balts recently emigrating on a massive scale and unemployment being particularly widespread in the country’s Russian-speaking communities.

The question, therefore, remains: What kind of information actually enriches the debate and which one can be considered false?

According to Rita Rudusa, a reporter who is known outside of Latvia, the core of such campaigns is often correct – but then facts would be exaggerated or taken out of context to draw a particular picture.

The Kremlin often portrays Latvia as a “failed state” and Western European states as threatened by disintegration. With this in mind, the question arises as to what qualifies as a legitimate debate and what can be described as propaganda.

But Russian sources often convey plain lies, according to Rudusa. For instance, Russian media recently published pictures of a forest filled with plastic bottles, reporting that Canadian soldiers had defaced a forest in Latvia. Research has shown that these plastic bottles are not even available in Latvia, but Russia.

In Riga and Helsinki, they say in unison that the West should not restrict freedoms online, which they ultimately see as freedom of opinion and the press. However, the regulation of social media should nevertheless be discussed because anyone who reads ‘fake news’ on social media would automatically receive articles, clips and comments that follow from such ‘fake news’.

Although these companies are based in the US, standards and regulations still apply to publishing houses, banks and the automobile industry, according to Sarts. Maybe these could also be applied to these internet giants.

Reply on TwitterRetweet on TwitterLike on TwitterTwitter
@realDonaldTrumpDenies@realDonDenials·
4m

I am not behind Mike Pence backchanneling instructions to the Ukraine to fire the Air Force. #FakeNews

Reply on TwitterRetweet on TwitterLike on TwitterTwitter
Victor Fattori@victor_fattori·
8m

Reply on TwitterRetweet on TwitterLike on Twitter1Twitter
Load More...
© SMARTeD